By yesterday morning the wind had pushed the storm, which had covered the entire country, into the North for them to deal with, and only the local clouds which watch over places like this were left. They waited respectfully around the rim of the caldera letting the sun through and it was impossible not to grin like an idiot the entire ten minute walk to the lake and down the shore toward the first unexpected attraction. 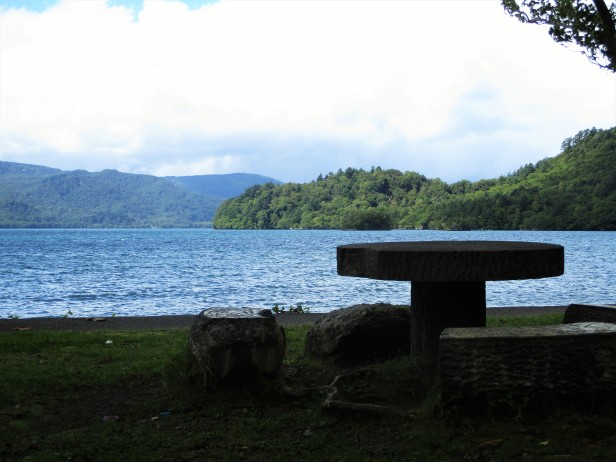 The attraction was a bronze statue atop a giant marble cube.

It displayed a scene that would have been surprising almost anywhere.

Two figures, in perfect stillness,
were galaxies pulling, over millions of years,
inexorably,
to a place where the look they held could be resolved.
Bound by time,
they told, openly, a secret that transcended their forms,
a record of something inside us
we race to find.

After sitting in wonder for several minutes, inspected a couple islands some number of football fields away that would have to be swam to the next day (today) 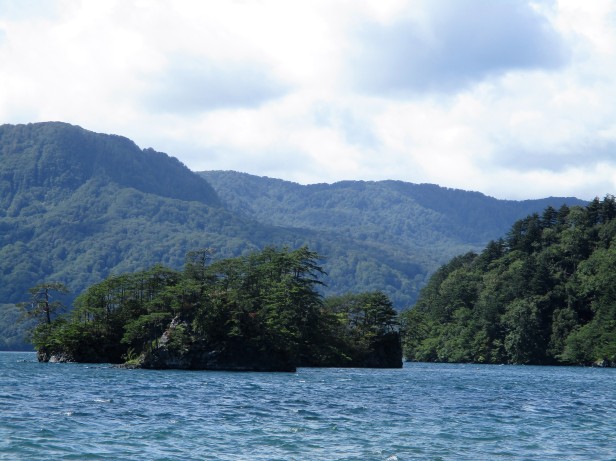 (yesterday)The lady at the apple pie shop which no one visited said it was dangerous.

No one, at all, swims here, no one even wades, one can’t help but notice, and the water is at least 70 degrees F.

There are no signs, except other than those saying: “bear in the area”, in English, with a lot more details in the local language.

Nevertheless, the next day(today) a far superior day, where the wind had stopped and the water was cerulean glass, finishing the last American Spirit and waiting for the nearly vacant sightseeing boat to slowly pass between the islands and the shore, the emptiness of the sharkless, crocodileless, squidless depths as high, downward, as the mountains, yawned in a stomach heavy with lunch and dessert.

Without going into the adverse relationship between a cigarette a day and the wind that is needed to blow one’s self a moderate distance over the dark blue maw of death, the first island was reached with a little huffing and it was while admiring the new perspective on the impenetrable shore beyond the beach, legs dangling over a submerged lip of the island, that the first attack happened.

A goby of some sort, full grown no less!!!, which then had the nerve to seek shelter under the same leg it had just assaulted.  The second one happened a few seconds later, and with the portentous words of the apple pie lady insinuating themselves into the quiet of the lake, the last few hundred feet to the big island were commenced.

More tired than expected, a little nauseous and slightly chilled, the view from the next island, where the rim of the volcano opened around rather than appearing 2 dimensional, as from the beach, was lonely.  It was beautiful, in the top two, certainly, with Bhagsu under the Himalayas, but the texture of Life, in shadow and in sun, running up the high walls of the dormant god of the mountain, invoked the feeling of Death.  Looking at the wild, bear-ridden forests that would sleep, indifferently, through the short seasons of humanity, and sensing the expanse underneath, was like the breathless feeling of standing over a great height, and nothing in between.

A jet skier came to check that everything was alright. It was. Smiling, with a thumbs up, he sped off to make circles in the vast open center of this corner of the lake.

The climb to the top of the island added an uninviting degree of adventure.  The rocks angled downward toward other rocks perhaps seeming to guard the nothing that seemed to be up there.

It wasn’t until waking in the dark early the next day, the last full day here, a day that would be dark and colder, that the mystery of the top of the island really started to turn.  When was the last time someone was up there?

Fall and winter were the season’s for this place, and no one would dream of swimming at those times.  Over how many silent seasons would a secret keep?

From the first seven days in cities, time was speeding up.  And there were a lot of pieces of the mirror, of the type, that hopefully society would one day be able to look into, still to be posted, pieced.

Today’s(the next day) story begins at dawn, when the sleeping town’s dreams are perhaps awake and stirring.